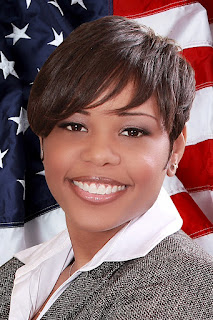 Beyonca Johnson and her team of volunteers are out every day knocking on doors to increase her campaign visibility. You have to love her perseverance and diligence.  Some may see her as the “champion for the people”, within the 7th district. Beyonca has stated that she has faced many of the challenges that people within her district have encountered. She can identify with their worries and concerns, and their need for security and a better quality of life. She prides herself for being the only candidate that has built a successful business in her district, helping people repair credit and counseling them for home ownership. She is a mentor and a leader to many young people there.

Johnson stated that our nation is in a crisis and the 7th district is in need of dire resources and direction. LaShawn Ford, state representative of the 8th district, encouraged her to place her name on the ballot. She had previously did work on Ford’s campaign.  Working side by side with Ford, gave her some incite on running a successful campaign. Not only did Beyonca build a thriving credit-repair business from the ground up, she is also a real estate broker. Her background in business has not only equipped her with the expertise in knowing how to balance a budget, but also has enabled her to have a thorough understanding of the needs of those within her community. Her business has been a revolving door for those who have turned to her in the midst of crisis. They have expressed their concerns for housing and jobs on numerous occasions. Johnson has been able to aid many through her business, but without proper legislation, she can only get so much done.

“It’s time for someone to step up and that’s me”, she says. “Our leaders should be about the people and making changes”. Beyonca Johnson has a powerful voice amongst those within her community. In fact, she stated that she has changed lives, winning the state representative seat will enable her to do it on a larger scale.

I asked Johnson if she felt there were obstacles, as a woman running for office. She stated that more women are filling legislative rolls. In fact, this position has been held by women before. Karen Yarbrough has been the state representative most recently, and Kimberly Lightford held the position prior to that.

If Johnson had to propose cuts within the district, she is willing to bring her team of professionals and analyze the budget and determine which programs would need to be cut. “Something has to get cut”, she says. She feels that she would have to carefully examine the needs of the people, and cut back on unnecessary programs. Beyonca is out there every day asking folks about their concerns and needs. Many have told her that they need jobs and housing. She feels something has to be done and she wants to be able to stand by them. She says it really is about the poor people. Everyone speaks of the middle class but people really are poor.

Governor Pat Quinn most recently made cuts to the state budget and closed many mental health facilities. Many of these patients from these facilities were housed inside of prisons. Beyonca is concerned about the welfare of these patients; she says that they need treatment and this could cause public safety issues.

She says that our Government officials have been forgetting why they are in office.  They have been catering to special interest groups and looking out for their careers. Their role should be about the people and ensuring that these folks have not been forgotten. We have to put a halt to the buddy systems and machine politics. We have to turn the pages on fighting and blaming one another across party lines and come together.

Her business experiences enabled her to make a difference within her community by providing many people with training and resources through credit repair and homeownership. Even though this is a hard time for many people, she feels that home buying will get better. However, we need better resource programs. “We have been here before”. Beyonca speaks about the economic crisis.  “Maybe it wasn’t as bad, but things will get better”.

In The Long Run

Johnson feels that if we don’t do something about our economy, the effects could be destructive. She says that things are really bad and we have to do something about funding our schools and gathering resources for the poor. She feels that we will get back on track. It will take time. She knows it really boils down to jobs, education and affordable housing. She knows she is there to work for constituents. She wants to make the 7th district one of the best districts in the state of Illinois. She plans to work hard and tirelessly. Johnson wants to be transparent and accessible. She is a passionate candidate that is genuine in all her plans and ideas.  She has never run for office before, but with her leadership skills, ability to get people engaged, she will make sure the people of the 7th district are not forgotten about.

Johnson wants to make sure the part of the $30 billion in bank funds are allocated to the 7th district. Banks have agreed to give $30 billion back to the taxpayers due to their bad behavior. This money is supposed to help homeowners who are in trouble or in need of assistance.  She doesn’t think that this is enough money, once the district gathers its portion, however it’s a start. She states that banks are not lending, they needed to reassess, and hold themselves accountable, to see why people are in crisis. They really need to step up to the plate. We have to impose legislation to stop banks so they can start spending dollars. Furthermore, banks should negotiate with homeowners instead of leaving homes vacant.

Johnson wants voters to know that she is running because it’s time to change some things, time to take government back, stand up and fight and come together. She feels that we have to become more active, more engaged and involved, here.  Her job is to make sure the community is properly informed whether it is creating early watch programs for foreclosures, or helping to educate youth. She feels that our priorities should be focused on the children here in the community and preventing foreclosures. Johnson is running on integrity and leadership. She is the only one that has her own business. She knows how to balance a budget; she is an employer.

She wants her constituents to know that she has experienced everything they have experienced. She doesn’t feel her role as a state representative is a career. She feels that she simply represents the people. She is an advocate for the people and they are hiring her to represent them.

Beyonca Johnson is endorsed by Secretary of State, Jesse White, The Teamster 700, Local Two, The Village Clerk of Broadview and Illinois Committee for Honest Government