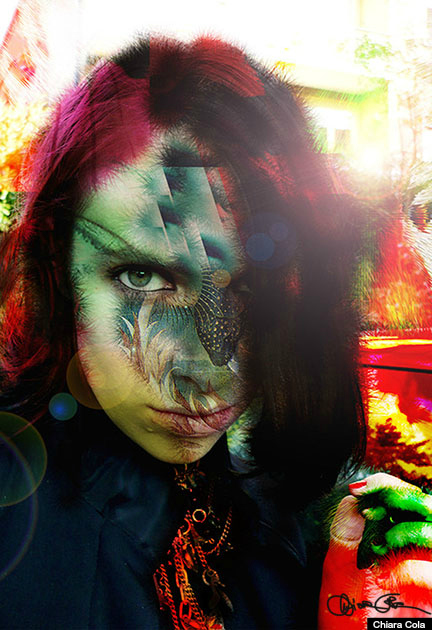 Chiara Cola in an Italian digital artist in Rome Italy.  Her artistic skill has led to her notoriety in Italy, UK, Russia and the United States. Some of her recent features in print have been in Vogue ITALY and Harper’s Bazaar Russia.

Chiara is a digital media expert who has been championed for her contribution to fashion. Yet, there are many depths to her work. Her fashion collections extend from fantasy balls gowns, scarfs, veils and even tunics. Her digital media expertise has enabled her to work with static digital images for print and produce animations. Some of her animations closely resemble videos akin to a think-tank, sci-fi series. Initially, some of  this work was introduced to print for exhibition. Later it became acquainted with fabric.

She has a remarkable eye for examining nature's mystical properties. She skillfully captivates life, metamorphosis of its creatures, and is undergoing constant study. She interprets her findings through various forms of media and finally reiterates this onto fabric. Life and its science is an inspiration for her work. Chiara has studied and captured the life of a lizard and transmit its many stages of transformation to print. While closely examining her pieces of fabric, you can sort of see this life and the change that is occurring. This phenomena and sort of delightful fusion of science and color is like saturated art, draped on pieces of wool, stretched tulle and silk. This has earned her nearly global recognition. Admirers of her work may simply see beautiful art, yet the process is quite intricate. This sort of complexity is what fuels Chiara to want to work along architects and even science. Much like Leonardo Di Vinci, Chiara is interested in interpreting the human body.

Chiara doesn't take on the title of fashion designer. Designers usually establish seasonal collections. Her designs stem from mostly “static” digital images and  infrequently, stills from her animations. Samples of these concepts were later introduced to textiles. Furthermore, her personal sense of style can not be refuted, as the fashion world continues to demand these developments. She admits that she would love to make costumes for theater and movies. To some degree, she illustrated this craft in a recent collaboration with Italian costume designer Milena Canonero. She has been a deep admirer of Canonero's work. Canonero won three Academy Awards for "Barry Lindon", "Chariots of Fire" and "Marie Antoinette". She is also creator of the iconic costumes of Stanley Kubrick's, "A Clockwork Orange". Cola accompanied Canonero with researching and developing patterns for the costumes regarding the movies "I trust you" by Luca Barbareschi and for "The Grand Budapest Hotel", which is an upcoming Wes Anderson's movie. Ultimately, Cola would love to develop prints for a Tim Burton movie. Movies like Burton's would enable her to expound on her enthusiasm for enigma and things that expand outside of the human spectacle. Chiara feels the imagination is far freer than life. She looks back onto her childhood and recalls this similar freedom as she pieced together her own skits. This sort of individuality has materialized in her work today. You can see this in pieces of her work like "PRISMA -The solitary land of the broken-hearted jewels". If there is such place, it's where all the forgotten, abandoned and lost jewels end up.

Though the field of digital media study is tough, it can be even harder for women. The Italian culture predominantly focuses on the needs of its men. But Chiara is hopeful. More women are establishing political leadership in Italy. Accompanying this new leadership, is an attempt to implement new ideas. Most importantly, she has been fortunate. Cola has established grants to study in places like Salamanca, Spain and Dublin, Ireland. Also, she has received an M.A. in media and communications, from the university of Rome La Sapienza. She credits the two years she spent in London, as a valuable development to her thinking.  Women and men appeared to be on an equal playing field there. There was a clear distinction between London’s culture and what she had been used to. These experiences have contributed to Chiara’s beliefs today. Chiara advises women to work hard if they opt for her field of study. She believes in surrounding herself around competitive circles and staying true to individuality and personal skill. This is an important trait for a digital media artist. Plus modesty is essential. It exudes a certain intellectuality. She states that women artists have to follow their own instincts. And she feels that it is critical to choose opportunities well.

She focuses heavily on the positive and even gives back to other women. Some of her work has been donated to a charity called The Good Shop, which is an initiative of Cooperazione Internazionale (COOPI), an organization, located in Milan, Italy. The Good Shop's project called “D come sviluppo” , work towards assisting women in Sierra Leone. The sale of Chiara's pieces along with other renowned designers like Roberto Cavalli, go towards helping women politically, as well assisting them in establishing economic resources.