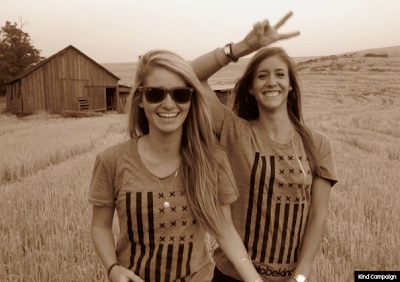 "In February 2009, two young women, Lauren Parsekian and Molly Thompson joined forces having both been affected by female bullying throughout their youth and decided to create change by giving females a platform to speak out about this universal  experience. What began as an idea for a documentary about girl-against-girl bullying, ultimately became Kind Campaign, an  internationally recognized movement, documentary, and school assembly program based on the powerful belief in KINDness that  brings awareness and healing to the negative and lasting effects of girl-against-girl “crime.”- IndieFlix


Lauren's ordeal throughout middle school changed her perspective. She suffered from isolation and lack of friendships. Her self esteem dwindled as she battled depression. She knew she wanted to do something after being subjected to that experience. Subsequently, she became inspired by a documentary that she worked on throughout a college internship. These sequence of events were life-changing. Accompanied by her best friend Molly, a documentary and nonprofit that entails raising awareness regarding the relationships between girls was born. Molly had her own painful experience in high-school. It was a no-brainer to champion a project whose basis was to simply promote being Kind.

Girl against girl bullying is far more sweeping and detrimental than it is perceived. According to the documentary “Finding Kind“, “One hundred percent of females  in America, will experience being a victim, aggressor or even bystander to female bullying at some point within their school  experience“. These experiences often lead girls fragile and broken, and in some cases, conceiving thoughts of suicide. Given the platform, Lauren knew that she would focus on this issue in-spite of her chosen pursuit.

Molly states that women and girls are frequently portrayed as being in conflict in media. Simultaneously, technology has its negative effects and is impacting the way women and girls feel about themselves. "...the fact that they are constantly telling us that we are not good enough..."  Yet, it still does not negate what's beneath the surface. Women and girls have tons of insecurities. She goes to add that,  "Often times we bring other people down because we are insecure about ourselves." This universal commonality has divided female relationships rather than unite them. Even the film points out that females view one another as competitors rather than comrades. There is a distinct cultural difference between female relationships versus male connections. Men often have multiple lifelong friendships. Girls and women are often lucky to have just one good friend.

The two filmmakers launched a national tour to visit various cities, talk to different schools and have spoken out against the negativity curtailing “girl-world”, as well as educate folks on the issue. The documentary reveals personal interviews with young girls and women who have been subjected to girl against girl abuse. It portrays a heartbreaking series of back to back stories of turmoil after being subjected to bullying and violence by fellow school mates. One girl explained that she was destroyed by a popular girl who was particularly vicious. Her confidence deteriorated and she cried everyday. She no longer liked what she saw when she looked in the mirror.

The documentary also points out that typically, girls that bully have been subjected to being bullied themselves. Some have had regrets of being the aggressor or bystander, wanting to go back and change what they had done. One teen can never forgive herself for hurting this other girl because she claimed that she knew how much she was hurting, but participated in attacking her anyway. " I knew exactly how she felt. And I knew exactly what was going through her mind and how much that hurt."

Lauren has had her own self-reproach. She felt that she could have stood up for another girl in middle school. In the documentary, she went back to ask for this young woman's forgiveness. She says that you do not want to live with this sort of regret. She asks folks to take personal responsibility. "Put yourself in other people's shoes. Because you really have no idea what someone else is going through or what their story is. ...we all have baggage and we all have things that happen in our lives that hurt. And you just have no idea why someone comes to school or comes to the workplace the way they do."

Lauren and Molly was forced to relive their stories through these girls. Lauren reveals that, “It was like being hit in the heart every time." Yet, they did not want their previous experiences to interfere with the stories. They wanted to remind the girls that they would be okay because they made it through their experiences. They wanted them to know that they will too.

Molly feels that girls could take control of their circumstances. She advises anyone who may be going through this experience to address the conflicting party with the issue.The conflict could possibly be diffused. Confiding in a third party may complicate the issue and create an even greater fiasco. She claims that girls have to be socially conscious of technology, while maintaining respect for themselves and others. Oftentimes, information can never be retracted. This is an age where the internet, social media and even texting can lead trails and have a lasting affect on future ambitions. Technology should always be used in a positive way. Molly also puts an emphasis on friendships. She encourages women and girls to explore their dreams and passions and share these opportunities with their friends. Lauren tells girls that whatever they are going through, it is not permanent. It is not their whole world. Even though the experience is painful, there is life and experiences beyond those school years.

The “Finding Kind” project exceeded Lauren and Molly's expectations. It started off as simple research, collecting data and garnering footage.  According to the documentary, "Within six months, they launched a nonprofit, started a website and had a huge following.  They formed a crew, convinced Toyota to donate a van, stopped in 60 cities, 28 states and drove over 10,000 miles to talk to thousands of girls all over the country". As a result, they were able to launch a national anti-bullying school program for girls. Currently, the curriculum is being used by thousands of schools throughout the United States and  Canada.


This Interview is sponsored by IndieFlix. You can watch "Finding Kind" at Indieflix.com.