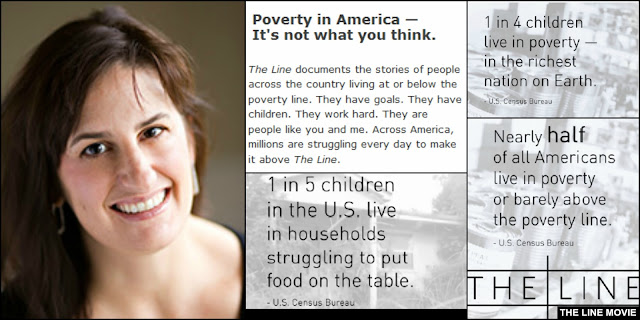 Linda Midgett, an Emmy award-winning writer, producer, and director has been in television for over 20 years and contributed over 600 hours of programming for networks like NBC-Universal, A&E, the History Channel and Investigation Discovery.

She was commissioned by the Christian based organization, Sojourner to do the documentary, "The Line", a film that entails taking a closer look at impoverishment, amongst its stereotypes and discountenance. The documentary focuses on individuals who are living well below the poverty line, struggling to maintain a sense of security. Linda discusses the challenges of showcasing programming such as this for today's TV. According to Midgett, projects like "The Line" would not have aired on television. There is less of an appetite for productions like these, stories that are divulging and authentic.

Four individuals were the highlight of the documentary, each living in places like New Orleans, Chicago, Dupage County Illinois and North Carolina. Some of these locations were formerly home to Midgett. These few riveting stories may be capable of altering America’s comprehension of poverty. According to the film, 46 million Americans live in poverty, quoted by the 2011 Census bureau. America has the third largest poverty rate, amongst the 47 developing nations. Linda says that there is this false perception of what poor people are really like. The film breaks down those stereotypes.

"The Line" discloses Americans that have been battered a bit by their ordeal, each struggling to maintain some sense of hope despite their herculean obstacles. This is probably why Midget can identify with Sheila, a mother who is attempting to make sure her kids' future is not expensed. Originally from Chicago's west side, an area that is known for its adversity and violence, Sheila and her family was able to relocate. Her children even received scholarships to attend private school. She was a successful working woman, full of optimism and vigor, married with three small children, when she fell down some stairs at a Chicago train station. She suffered a massive injury, which led to a series of strokes and brain surgery. Her husband eventually divorced her and she had no choice but to depend on disability checks and food stamps; she never fully recovered. Taking care of a family of four has been merely miraculous. Sheila has had to put aside much of her personal dreams, but she has been resilient in making sure her kids had possibilities.

The perception of just who and what is poor is clearly blurred. “The Line” documentary affirms this. Poor people are a reflection of the average, everyday American. Their the neighbor, the friend, the guy or girl working at a local restaurant or a sole proprietor. They even reside in affluent communities. They don't just live across the tracks, contrary to some former perceptions. Nor are they sub-human or mentally deficient.

According to the film, suburban poverty is growing at a vast rate and is rising higher than urban poverty. Linda was surprised by the poverty in Dupage County, especially since she attended school there. Dupage, Illinois has been typically a wealthy county. Yet their poverty rate is surging. Stories like John's are becoming far more frequent, a father of three, former banker that was on a six figure salary, yet he is living below the poverty line. John did everything right; he was a straight "A" student, scored high on the ACT and graduated with high honors. John never could have foreseen that he would be living well below The Line. He eventually lost his job and his wife divorced him. He went back to school to pursue elementary teaching, but failed to land a full-time position. He says that, "Sometimes you feel like you are just sending your resume into a black-hole". His fate almost appears destitute and hopeless. He tries to get by with tutoring on the side and substitute teaching. To keep a roof over his head, he rents from owners that are in foreclosure, has Medicaid insurance and attempts to do odd jobs to lower his rent. John feeds his family by visiting a local food-bank. The selections are slim. He explains that every now and then, a grocery item or two may be expired. He's grateful, but he's cautious. He goes on to discuss some of the other challenges he has had to face. John adds that, " It's the most horrible feeling, when your kids go to turn on something and it doesn't work...I don’t want to worry about this anymore...You are doing everything that every person says is the right thing to do, the right steps to follow. But it's not happening. And what if it doesn’t happen? What if it doesn’t happen fast enough?"

Linda did not have trouble finding people who were willing to share their stories. However, many were unwilling to go on camera, especially with their children. Poor people aren’t interested in coming out in the open, and disclosing their state of affairs. Sometimes they are ashamed. For one, Linda says that there is a lot of anger towards the poor.

Overall, Americans really do not have a thorough understanding of the poor because they resemble themselves. This contributes to the notion that “The economy is getting better and that there is plenty of opportunities for everyone. The unemployed just have to work harder or be more assertive“. An excerpt from the movie explains that "People that are untouched by the recession thinks that unemployment is going down. They are not seeing folks that have been struggling for a long time..."

In-spite of all the ridiculous stereotypes and perceptions, poor people are relative to most Americans. They are just as intelligent and relentless. At one point, they were full of exceptional promise, but something ugly got in the way, something that was out of their control and pushed them towards the bottom, way below The Line. Ideally, Linda hopes that people will grasp some understanding and maybe this will carry over into the nation’s policies.

Midgett doesn't seem to box herself in, as she continues to produce stories that exposes the human spirit. She just wrapped up a miniseries called "Neale Bayly Rides Peru" for the Speed Channel. The documentary features "a group of motorcyclists, including veteran motorcycle journalist Neale Bayly who takes a trip of a lifetime to Peru. They face unbelievable challenges through the deserts and mountains…but find it’s all worth it when their journey leads them to an orphanage.” She also has a deep respect for documentarians like Alex Gibney, the director behind ENRON: The Smartest Guys in the Room, A documentary about the Enron corporation, its faulty and corrupt business practices, and how they led to its fall.

Though Midgett is accomplished and immersed in her work, she is a mom and wife and deals with those day to day concerns that are relative to working women. She is attempting to maintain balance, being true to her faith, as she continues to move forward, and as it seems, contributing a personal story that is enriching.

This Interview is sponsored by IndieFlix. You can watch "The Line" at Indieflix.com.