Interview with Jodi Savitz for the film “Girl on Girl”- In the Face of Doubt: Skepticism of the Feminine Lesbian 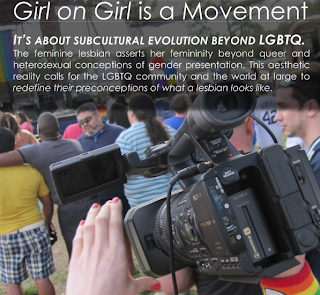 "Girl on Girl is a story: It's about rewriting our past and securing our future. Throughout the narrative of American lesbian history, the status of butch/femme is considered the most recognizable lesbian archetype and continues to set the precedent for establishing lesbian visibility and space. Our story seeks to move beyond gender roles to reclaim feminine lesbian identity, in and of itself, as an image of the past, present and future of the LGBTQ community…”

It's grant season, and Jodi Savitz is currently applying for a series of opportunities for the documentary-in-the-making, “Girl on Girl,” sponsored by the New York Foundation for the Arts and with support from Curve Magazine. As she closes the chapter on her previous film, "Yo Soy Así,"a film that sheds light on the complexities of lesbian life in Buenos Aires, Argentina, she introduces the project "Girl on Girl", a documentary that "follows several women as they struggle to defend their identities as feminine lesbians in the face of skepticism." Savitz is a champion of the arts and holds a degree in both theater and gender studies. As she continues to produce compelling tales of lesbian women, she hopes to bridge the gender-gap by creating opportunities for all women through film.

Growing up in Plantation, Florida, Jodi had a positive coming-out experience when she began dating a girl at age fourteen. She felt a sense of community and commonality among other lesbian girls in her high school. These friendships came easily. Many of the girls were feminine, much like her. Similarly, it wasn’t difficult for her to find a community of feminine lesbians in South Florida. Outwardly, they were a community of women that appeared to be much like any other group of heterosexual females; they may opt to wear their hair long, paint their nails, and wear lipstick, dresses and heels.

It wasn't until she reached Chicago that she suffered from a sense of isolation. There, she attended Northwestern University, located in Evanston, Illinois. Chicago's north side is renowned for its diversity, and knowing that, Jodi thought Evanston would be an open and accepting environment. To her dismay, she felt unwelcome and lost among Chicago’s queer community. She was a young, feminine lesbian, residing in a city much different than her hometown. Furthermore, she was attracted to other feminine lesbian women. Jodi was met with skepticism for her “straight looking” appearance, and often felt pressured to defend her sexuality. People did not understand her, nor did they take her seriously. She genuinely felt like an outsider, despite majoring in gender studies and actively seeking out her university’s LGBTQ community.

Frustrated and in search of an answer, she decided to do her senior thesis work on an aspect of the lesbian community in which she came out: lesbian femininity. Jodi observed that South Florida had an unusually high concentration of feminine lesbians versus any other city. She hypothesized that it was the influence of Latin culture, and the large Latina lesbian community in general, that ultimately supported Miami lesbians retaining their femininity. Customarily, Latina women are socialized to value feminine qualities and characteristics that are considered attractive to heterosexual men. Interestingly, Jodi’s research revealed that many South Florida lesbians had retained their “feminine” identity because both the Latin and lesbian communities in which they socialized were highly receptive to it. Unlike other lesbian communities, the South Florida subculture did not pressure women to choose between their lesbian sexuality and their femininity; both identities could co-exist without eliciting skepticism from other women in the community.

"Girl on Girl" depicts portraits of women who have identified themselves as feminine and have faced a different dilemma. Some have felt a bit alienated by the lesbian community. Others are fed up with the condescending comments and disbelief of overzealous male suitors. Much of their frustration is a product of male-controlled social environments that seem incapable of digesting that lesbian women who exude qualities attractive to heterosexual men don’t want or need male attention, and in fact, only desire other women.
Nevertheless, there is discrimination towards femininity across the board, even when applied to both sexes. Jodi explains that men with feminine qualities versus masculine ones are usually depicted as weak or even powerless in the media, while women who take on masculine characteristics and traits versus feminine are generally perceived as being strong and secure. Masculine portrayals are commonly and universally vetted for leadership. Overall, the ‘feminine’ quality is commonly misconstrued as ineptitude. This means that feminine-identified lesbians are often subjected to similar types of discrimination and condescension because the perception of femininity in and of itself is distorted.

To society, lesbian sexuality can be negotiated given the appropriate amount of masculinity to accompany it, to possibly safeguard it, to keep it, or even to protect it from the big, bad world. Women who are androgynous or those who do not prioritize femininity can be easily or even mistakenly identified as lesbian. However, without an associative amount of masculinity, a lesbian’s credibility becomes questionable and her visibility is seemingly impossible. One woman within the documentary goes on to claim that, "the idea is that if you are gay, you are androgynous, or butch, and if you look like you are this heteronormative woman, then you're probably straight." In short, feminine lesbians are often presumed as heterosexual simply because they've adopted the same characteristics and traits that are considered attractive or alluring by mainstream society.

"Girl on Girl" also discusses how some lesbian women sacrifice their femininity and assert a more recognizably ‘lesbian’ gender presentation to alleviate misidentification outside and within the LGBTQ community. Several girls note that on their campus, queer women get “undercuts,” cut their hair short, wear alternative-style clothing, and often get tattoos and piercings to visibly mark their sexuality to others. But for this particular group of storytellers, these measures are not a suitable fit. For them, feeling attractive is dependent on having the freedom to express their femininity as part of their lesbian identity. Ultimately, they don’t want their gender presentation to jeopardize their relationship to the LGBTQ community. They simply want to be taken seriously.

Above all, the message is clear— every lesbian woman is different. By tackling issues of invisibility, the “Girl on Girl” discussion is breathing new life into the Lesbian community. As the filmmaker continues to produce and introduce a series of sizzle reels, support for the project "Girl on Girl" has grown to over 6,000 Facebook fans from across the globe. But as diverse as the audience may be, they will walk away with one simple resolve: lesbian women are multifaceted, just as any other culture or subculture. Metaphorically speaking, their community is not composed of any sort of monochromatic or achromatic color, but of a rainbow, the precise representation chosen by and for the LGBTQ community. Recognizing its diversity enables it to shift, shape and morph into what it ultimately wishes to be: a visible and thriving community. The film is expected to release between 2014 and 2015. 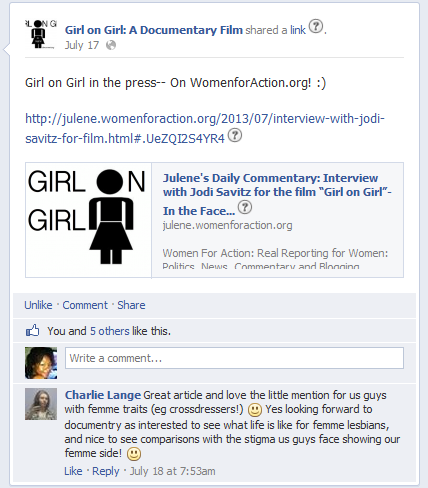