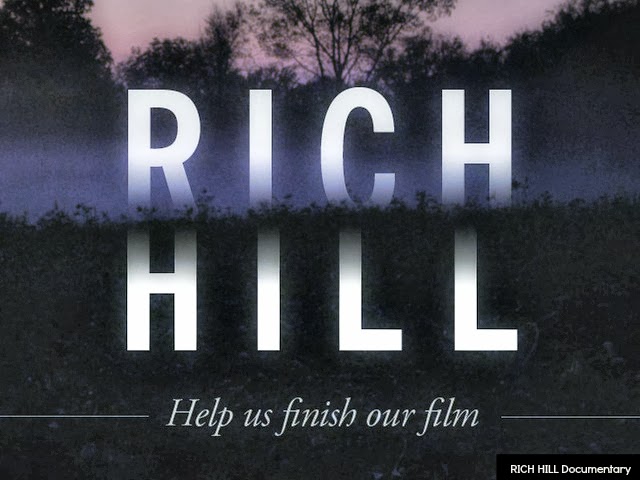 There's a small town that sits on the edge of Missouri. In some ways, its placing on the Missouri map is uncanny to its withering existence. Yet what truly haunts this town is its ghostly name, Rich Hill, branded with the motto, "The Town that Coal Built". It was at its peak during the blistering coal boom. The town bustled with small businesses and local shops. There was good opportunity and easy living. Today, that sense of serendipity is long gone for many and removed from its ancestry. Rich Hill has become dilapidated, isolated from its brethren towns and the rest of the nation. Not much is going through it and very little is coming out of it. As much of America fills its cafes and shops with folks on iPads and iPhones, or even as public transportation parades through its suburbs and cities, Rich Hill lingers with an eerie existence .

Many families still reside in this hollow town located near Kansas, Missouri. It is a town with a population of 1461. In-spite of its lack of resources, the people are earnest and resilient. It is their home. There is the belief that, somehow or some day things could get better. Their anticipation is what keeps it together. Some say that the community is still rich in spirit and can attest to the lion heart that persists.

Documentarians and first cousins, Tracy Droz Tragos and Andrew Droz Palermo, teamed up to tell a story about Rich Hill, a place where their parents grew up. Tracy tells Women For Action that the face of Rich Hill has changed.

Much of Rich Hill’s problem is that you still have many townspeople that are unemployed and without adequate means. The local K through 12 school is a major source of employment. These are considered "good jobs". Those that are lucky to have one, are able to support themselves and their families, along with those that have farms or land.

Tragos discusses a few of the downsides of rural areas like Rich Hill.

"When people don't have jobs and they need to look for jobs, you know you um, and the price of gas is high..you can't get there. It just a bit of a cycle of being trapped".

There is no public transportation to connect those without cars to neighboring towns. This lack of sufficient employment leads to those without electricity or even home phones.  From one perspective, Rich Hill may appear to be a dead end, or a drop off point in the heart of America. Yet to many others, its autonomous spirit is what gives it character.

This film is closely connected to Tracy's previous documentary, "Be Good Smile Pretty", an award winning documentary that tells a story about a father she never knew, because he died in Vietnam when she was an infant. Though Tracy won an Emmy for her last film, Andrew's cinematography work has flagged him as a new face in independent film by Filmmaker Magazine. For the first time, they have chosen to collaborate for the documentary RICH HILL. For them, the historical town that their film is named after, is a residence of ties, family and commitment; it is a second home.

The storyline revolves around three boys who have been subjected to some daunting circumstances in their young lives. Yet they hold on to hope and the belief of healing and transformation. They have aspirations, a desire of being someone or doing something different.  Their hometown, Rich Hill lacks some resources. Some parts of it has been strangled with desolation and is smothering the dreams of some of these children.

Though the children are enriched with love and commitment to family, their circumstances tell another story. Sometimes they go to school hungry and may not have regular meals. Tracy discusses the challenge these children face to sometimes communicate.

To access the internet the children would visit a small local library, which only consists of two computers. For families that rely on it, the hours of operation has not be enough.

Yet these children know that the entire country doesn't mirror their humble existence. They have dreams of making it better. They just don't have a road map to bolster their aspirations. In a sample footage, one teen declares that, "God has to be busy with everyone else...He will eventually come into my life and help me. I hope it happens. It's gonna break my heart if it don't."

The filmmakers hope to shed light on rural areas such as Rich Hill, especially those with meager resources. The conditions can be dire. Not to negate poverty and unsubstantial means in places like inner cities. Yet conditions in small rural towns often go on undetected. An excerpt taken from their Kickstarter page addresses this notion. "Where youth in an urban setting might encounter sources of help and hope, kids in rural areas can be stranded, with their need unseen and unrecorded." Children in these areas may be at risk of circumstances that may resemble conditions within the inner cities. Yet an escape seems almost impossible. Tracy noted the difference between Rich Hill and inner cities, “ The biggest thing is the isolation. Um and there is no public transportation. So when your car breaks down, and or you have no money for gas, you're stuck...”

The RICH HILL documentary has a Kickstarter campaign that is attempting to raise $60,000 by October 4th. Post production is anticipated after November 1st. The project proposes to lend some insight on rural area poverty through the voices of children that have been discounted and overlooked. The filmmakers recalled an earlier conversation with a fellow classmate, in a class led by independent documentary filmmaker, Robb Moss (and Harvard University professor); In summary, a film such as this enables the audience to accompany the children (who are the storytellers). The audience is not only able to visualize, but conceptualize and empathize with the child’s ordeal. It is the making of a critical and essential social issue documentary.


@womenforaction Poverty is a self fulfilling prophecy. Thank goodness some.of us recognize it for what it is and work to end it. TY!
— Kale (@KaleJPhoto) September 20, 2013