Interview with Vanessa Crocini, Filmmaker of Get Together Girls

A young documentary filmmaker,  traveled to Kenya to explore an enterprise that has been changing the lives of young street girls. Contrary to the title, street girls are not prostitutes. They are young girls who are displaced in Kenyan’s society and often homeless. After high school and earlier support from a local organization for rehabilitation, from spending their childhood on the streets, the lives of these girls seemed to have plateaued again into an abyss of no direction or clear future.  They found themselves consuming the reality of a typical street girl while residing in  overcrowded slums, without professional buoyancy and very little stability. Some of them attempt to survive day to day by begging for food.

What was comprised of the filmmakers discovery was that one woman by the name of Grazia “Grace” Orsolato had left behind a comfortable life and career in Italy, to relocate to Kenya, Africa where she aided and assisted in a sanctuary for street girls called “Anita’s Home”. In this place for reformation, Grace built an organization called Get Together Girls (GTOG), a project where the girls come together to learn invaluable skills in tailoring and business management. The budding project eventually led to an African fashion collection, which has been seen on the runway in Kenya and Milan. The project has changed the quality of life for the girls and planted security for their futures. Vanessa Crocini an Italian filmmaker living in Los Angeles and Italian rockstar Vasco Rossi, posed as executive producer, documented the project under the same name and exposed the brand to the world.

In a place they have called home, it is often a curse to be a girl. Girls are thought to have very little value in places like Nairobi, Kenya. Life seems formidable. Irene a sewer and now a mom inside the project talks about her upbringing and her means for survival while living in the slums. “When I was in the street, I remember nobody knew that I was a girl because I even looked like a boy. I used to wear boy’s clothes because I was very bright. Because I knew that if people knew that I am a girl, I’d be raped too. So I used to wear like a boy, walk like a boy. Now I was pretending to be a boy. So nobody would know that I am a girl.” Irene may have been far more fortunate than most. In the crowded slums where the street girls reside, girls have very little security and protection; they are often preyed upon by the remnants of the streets. Places like Anita’s Home have become a safe haven for many of the girls. This is where they spend a part of lives because there are very few places to go. A Project like GTOG has enabled them to move forward even when the streets attempt to restrain them.

Crocini’s documentation of the project is a way of creating awareness about certain conditions and sounding the bullhorn on an NGO that has been saving lives. Circumstances surrounding her adopted Ethiopian niece and a previous trip to Africa for another production directed under her mentor and Italian filmmaker Alessandro Rocca, motivated her to unveil some of the layers within the African culture.

Even though Africa is generally perceived as impoverished and struggling, Vanessa feels that it is often misinterpreted. She elaborates on Kenya.  “Kenya would have money. But it is not well managed. First you see the skyscrapers and then you turn and see slums...There is still this difference between rich and poor...”

Though poverty is thick in Kenya, there are also people with riches. Crocini seems certain that there is a much bigger picture. “I think they do have resources but they are not used properly... the amount of money that we give back to Africa, or all the after taking all the resources we take from them, is a tenth of what we earn, from you know, any resources that we take from them. So you understand over there is a balance that is completely off...it is definitely their fault too. It is our fault and their fault…”

As a documentarian and investigator, Vanessa has a certain obligation to the truth, which is why she traveled to Kenya alone and left behind her executive producer. She felt that the girls inside this project may have been less likely to share their lives if a man accompanied their crew. Afterall, the objective was to get a peek inside their worlds so that their reality could be revealed on camera. Though, It wasn’t an easy task. Initially, Crocini thought the girls would be reluctant. The first couple of days Vanessa would follow them around with the camera turned off. She felt that she had to earn their trust. Eventually, they embraced her presence. Once the camera started rolling, she became enthralled by their stories. She talks about the roller coaster of emotions she underwent while interviewing the girls of GTOG. “I was crying too when I was interviewing  them... It’s a lot to bring up again, you know? It’s a lot to share. But I think also. I was telling them you know, that if you share your story, someone else probably is going to feel empowered”.

Crocini wanted to respect Grace’s space. She was finally able to interview her on day 28 out of 31. For that reason, the time invested seemed far more rewarding .“She had never really talked like this to anyone,... like in an interview like that. The interviewed lasted for an hour and half”.

Yet, Vanessa was unsure of her progress. Working alone presented some obstacles. There was no colleague to discuss the day’s work or to lend her feedback on the mounting footage. Nor was there anyone to assure her that it was a success.

Still the final results speaks for itself. The GTOG girls are a testament of that. Not only have they championed the efforts of the film, their collection has increased in sales. In addition, the film trailer and clips has been seen in over 116 countries and the film has been showed in 16 film festivals all over them world.

Vanessa feels that documentaries are extremely resourceful. Unlike movie-making, they don’t resolve in minutes. The stories continue, sometimes for better or for worse. In this particular case, one girl by the name of Esther left the GTOG project since the filming, yet another young woman by the name of Janet who appeared to have blown off the project in the past, had returned.  It would seem that documentary makers have very little control over their subjects. Lives go on beyond the filmmaking, even for the filmmaker herself. Back at home in Los Angeles, Vanessa collaborates with the Social Impact Media Awards which works towards promoting and exhibiting the works of independent filmmakers, activists and change-makers that are often overlooked. Just like those of the Social Media Impact Awards, her film has worked to change perceptions. It has even aided girls that no one cared about. Aside from its global viewership, Get Together Girls, has won several awards at the Women's Independent Film Festival.

Some could say that Vanessa is biased about Africa; the continent is tattooed on her shoulder. Apart from that, she feels that folks can learn a few things,“The women there are strong and there is a lot to learn from. Because...they always have hope…”  If not Africa, she encourages folks to step into unfamiliar territory which builds character. “I feel like we need to know and we need to experience a little bit of when we are not a majority...and when we are a minority, when we are in a situation when we have no control of, I think its good because it puts a lot of things in perspective...you should always not be afraid of what we do not know, ... push a little bit boundaries of yourself...to the next level”

Visit Get Together Girls online at:

(The documentary is visible on Indieflix, Roku and XBox and will be watchable through Facebook soon through Yekra!) 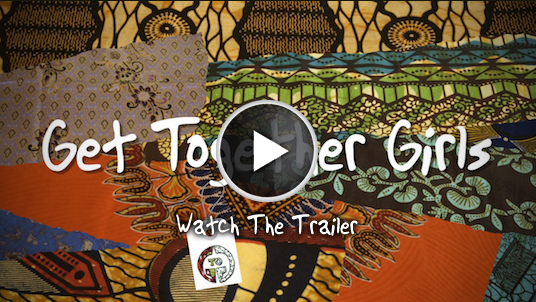