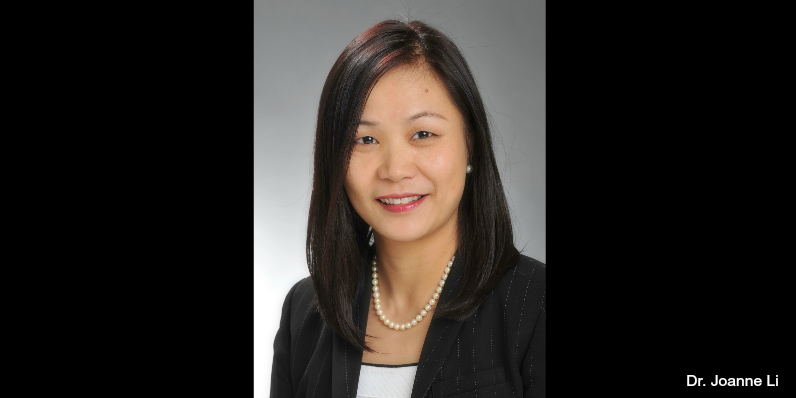 Lean In Dayton: You have a doctoral degree in finance from Florida State University and are a recognized scholar in the fields of corporate governance and international finance. What led to a decision to go into finance?

Dr. Joanne Li: Hong Kong is one of the most important financial centers in the world. That got to have something to do with my choice of study.  There is a myth about girls not being good in math. I think it’s partly due to whether they receive proper teaching or good instructors. Early in my academic career, many of my economics accounting professors would state, “You are really good at math. You should pursue it.” Actually, I found the discipline of finance fascinating. Possibly, in my second/ third year, my professors explained that I was good in economics and accounting and that I should consider it as well.  Subsequently, I took a lot of accounting courses. The courses were instrumental, but accounting didn't fit my personality. Also, finance involves a reflective learning process, meaning, when you go to the pool, you just don't keep practicing to improve your speed, and style, you have to get out the pool to think about what you did wrong and how you could improve your stroke or how you can reduce the seconds to cross the 50 yard line. Finance is sort of like that. So that’s how I ended up with a major field in finance and a minor in economics.  In my Ph.D. study, I continued to pursue graduate study in finance and a support area in econometrics. I enjoyed the study of finance and think the challenge was worth it.

Lean In Dayton: How so?

Dr. Joanne Li: Sometimes when you are one of the two female students in the whole class, it could be emotionally intimidating. I remember when I was taking a fifth-generation computer language class in my finance major, and I was one of the two female students in the class – we often did homework until 3 am. I think by the second or third week, I was the only girl in the class.  I try not to look at my gender and say, “Just because I’m a girl, I shouldn’t think a certain way.” I look at myself as, “What can I bring to the table? Or whether I have the skill set to survive in the finance discipline.”  Most of the time, I don’t even think of my gender has anything to do with finance.  The discipline itself is colorless and genderless in my mind.

Lean In Dayton: You grew up in Hong Kong. How different were the opportunities for you compared to those within the United States?

Dr. Joanne Li: Hong Kong is very different than the United States. At least at the time when I grew up, the population was very homogeneous. We loved foreigners because they represented a very small percent of the population. Things were a little different in the United States. I went to Florida State University which is a big university with quite a diverse student body. Sometimes you have to be courageous enough to speak up and not so concerned with whether you sound intelligent. Part of the lack of concerns stem from my personality and others were possible because I went to an all-girl, catholic high school. I was very athletic in high school. I was on a lot of sports teams. Overall, I was competitive and there was very little regard for who I was competing with. Because of the competitive sports experiences, I am far more outspoken today...