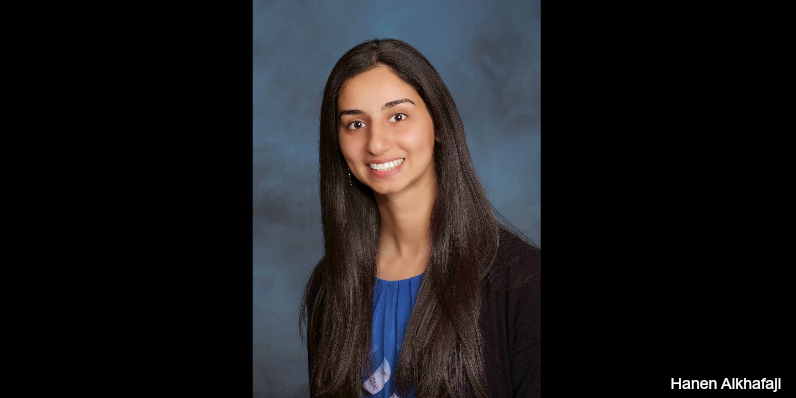 Lean In Dayton: By trade, you are a software developer. What led you to pursue a career in the STEM (science, technology, engineering, and mathematics) field?
Hanen Alkhafaji: When I was 2 years old, I lived in Iraq with my family in the middle of a war zone.  Due to the war, we were without water and electricity. This led to an accident in which I burned my legs with hot oil. A generous pediatrician managed to get my parents the medicine I needed to calm the wounds down. We were very lucky to have had that happen because we fled the country shortly after that accident and lived in refugee camps before coming to the United States. Had the wounds not been addressed, they could have been greatly infected during the long relocation process. Even though I was much too young to remember this encounter, my parents have repeated it to me many times, so I feel as though I remember it all so well. Since hearing the story, I always wanted to be just like that pediatrician. I wanted to have a career that was geared towards generously helping others. So, I set out to become a pediatrician myself and collected magazine clippings of admirable doctors who worked with Doctors Without Borders to help keep me motivated and focused. Unfortunately, after my freshman year in college, I quickly realized that although I had the passion for helping others, I lacked the necessary interest in biology. I knew that I’d never thrive in a career path that I wasn’t completely excited about. In addition to premed, I had decided early that I would take computer classes as a backup plan in case medicine did not work out. I found that when I wanted a break from memorizing concepts and words for my biology class, I would seek refuge in my computer programming projects. I enjoyed learning computer languages and the problem-solving aspect of computer science. I didn't need to memorize anything because I enjoyed it so much that I simply remembered it all. Many students in my premed classes were that very same way when it came to biology and chemistry because they were passionate about those subjects. That's when I discovered that my passion was in computer programming. I was at first upset with myself for not being able to meet my goal of pediatrics and helping ailing children around the world. However, a kind-hearted friend told me that I shouldn't feel bad, because computer science would give me the tools I needed to help others, too. They reminded me that I wanted to help people and that that could be accomplished in more ways than just medicine. I look back now and feel that they were absolutely right and I have no regrets.


Lean In Dayton: Tell us about a time when you faced an obstacle or challenge due to your gender working in the STEM field?
Hanen Alkhafaji: I have had the good fortune of very rarely facing obstacles or challenges in my field, even though I am a minority in both race and gender. I have been treated very fairly both in academia and the workforce. I have encountered nothing but respect, kindness, and fair treatment in this field. My dad has been the biggest champion behind many of my successes. I have one sister and three brothers. My dad never made us feel that our genders mattered when it came to his expectations of us. I’ve carried that with me throughout my life. I never expect any special treatment because of my gender and I haven’t come across any obstacles, so far, because of it.


Lean In Dayton: What sort of rewards come from working in technology?
Hanen Alkhafaji: The biggest reward of working in technology, for me, is the privilege of being a part of a community that is constantly growing and moving forward with the times. I get to find out about all of the new advancements that are occurring around us and have the chance to move forward with them in the projects that I work on.