Interview with Cathy Ponitz, Vice President of the CareSource Foundation 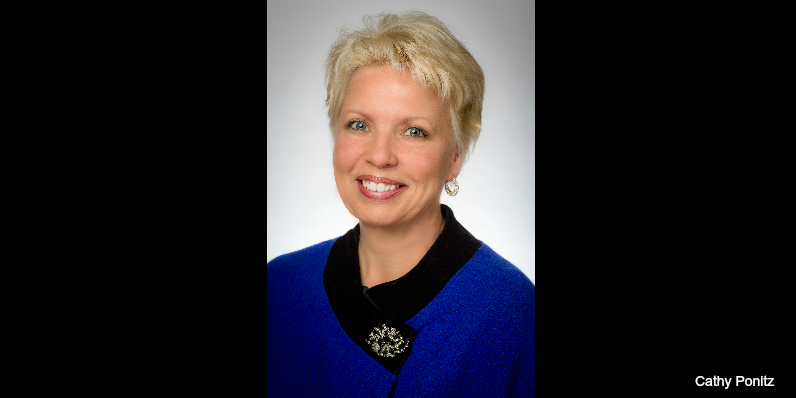 Lean In Ohio: Your dad was a college president and your mom was a school teacher and avid volunteer. As a result of their community engagement, you became influenced by different types of educators and leaders. This is a valuable resource for any future leader. How did this help shape your leadership style?

Cathy Ponitz: My parents are forces of nature. I didn't realize that when I was a child, but I did recognize something set them apart from other people. From early on, my parents made a conscious decision to introduce their children to adult situations whether it was going to the symphony, traveling to Europe or expecting us to be able to have a conversation with adults. We were encouraged to be curious, find our passions, pursue our interests and not just talk about them. They encouraged us to do more than just discuss change or problems, but to be a part of the solution. It was about showing up and sitting at the table, having an opinion. We were taught to allow others to share their voice, to listen actively and to follow up on what we said we were going to do.

These qualities helped my Dad be a successful college president and community leader. He’s 85 and people still want his energy and his counsel. I don’t blame them! I laugh, but I have a Mom who really does work for world peace. These qualities helped her be successful at that. After the signing of the Bosnian Peace Treaty in Dayton, my Mom immediately set forth to figure out how to help women in Bosnia, especially those who had lost their husbands and fathers in the war. She sought out influencers including legislators, business leaders and philanthropists and helped them understand the issues. The real issues of people in a post-war society. As a result, it created an even larger impact in Dayton, which is why we have so many wonderful Bosnian families who live here. She helped them create a better life, a safe life, for their children. Watching my parents take on herculean efforts certainly encouraged me to think big.

Lean In Ohio: LEAN IN says that obtaining certain career goals are seldom like climbing a ladder but much more like climbing up, down, side to side and around a jungle gym which brings to mind the paths you took throughout your career. For example, early in your career, you worked in retail. What skills did you acquire which helped you facilitate your role as Executive Director of the CareSource Foundation?

Cathy Ponitz: When I was in high school, I loved the mall. Early on when I was trying to determine what I wanted to do with my life, I knew it had to be at the mall. From the time I was a junior in high school, I worked at Rike’s, a major department store. By my senior year, I was working 40 hours a week since I had almost all the credits I needed to graduate. I took two classes and worked at the mall the rest of the day. I couldn't have been happier.

As I went off to college, my dream was that I was going to be a buyer for some great store. Bergdorf-Goodman. Maybe Neiman-Marcus. I was going to travel the world as their buyer—silks from Hong Kong, leather from Italy. In my mind it was going to be this fabulous, glamorous life. I had a standing offer from Rike’s following graduation to join their management and buyer training program. I had the world on a string and couldn’t wait to start my career with them

About three months before I graduated it all came crashing down. Rike’s merged with another retail chain. They put a six-month freeze on all hiring. Suddenly, this beautiful plan I created for myself had exploded. I panicked and started interviewing with major stores across the U.S. My navy blue suit got quite a workout! Two months to go before graduation and I was exhausted. And then I got a call from my Dad. He said, “For four years you have done what you needed to do. And now that it looks different you’re on the verge of making questionable decisions. I know you believe you have to graduate with a job. Here’s what I think. Your college career is almost over. Just take a breath. Enjoy the time you have left, graduate then work hard finding where your space is. I know you’ll find it.” The amount of relief I felt from that call meant the world to me and taught me a great lesson that I try to never forget. I can put a great life plan together, but there’s a good chance that it’s not going to turn out the way I envisioned it. And that’s OK.

So I became open to the surprises and it served me well. Ultimately I spent six years in specialty store retail and it was a fantastic opportunity. I went from store manager to regional supervisor. I managed hundreds of people and millions of dollars in inventory.  While on assignment in Detroit I received a tremendous offer to join a well-known marketing firm. Ironically, they were based in Dayton so I came home and connected with dozens of young professionals who I still consider some of my closest friends. From there I took a unique position with the Dayton Foundation—my first entrée into the world of philanthropy. It was exhilarating. While there I sat on the local Girl Scout council board a fellow board member encouraged me to use my skills back in the private sector and, as the saying goes, made me an offer I couldn’t refuse. I took the leap and joined Reynolds & Reynolds. I learned a new industry which ultimately led me to corporate community relations and running two corporate foundations.