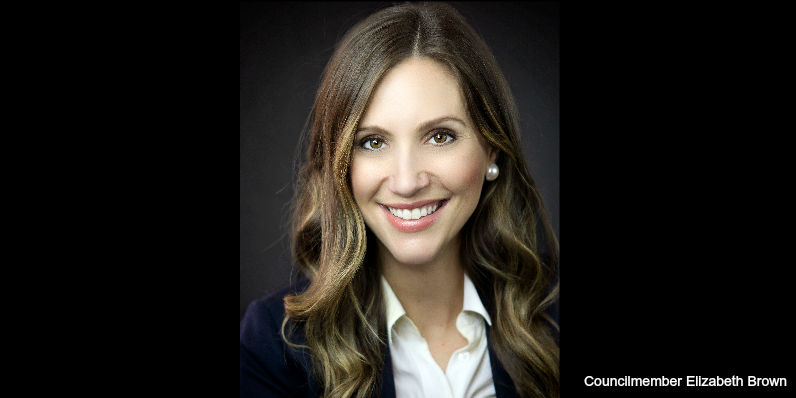 Lean In Ohio: According to LeanIn.Org, “Mentorship and sponsorship are key drivers of success, yet women can have a harder time finding mentors and sponsors, especially ones with influence.” Who or what has been instrumental in your professional development?

Councilmember Elizabeth Brown: As far as personal development, I am passionate about the work I do and it stems from how I grew up and formed as a person. In addition to my two wonderful parents, I was inspired by my two grandmothers. Both were born in 1920 which was the year that the 19th amendment was ratified. They were leaders, courageous, and involved in public work centered on contributing to their communities. Observing them instilled in me the realization that when we are all gone from this world, the only proof that we were ever here is the footprint we leave behind. I’ve asked myself, “What do I wish to leave behind?” That question is my guidepost for the choices I make in my profession as well. In terms of professional mentors, I’ve had the incredible good fortune of knowing women and men, not necessarily in my field, who care about my success. I’d tell every woman to look for these people because they are out there. People who can introduce you to interesting people and ideas, and who are willing to make the extra call or introduction just to help. I’ve had very few career-long mentors because at different times in my career I have different needs. Instead, people have mentored me – likely when they didn’t even realize it – based on what I most needed at that unique time.

Lean In Ohio: Studies say that women who run for public office are just as likely to win as men. Plus there is no disparity in their performances. However, women have a lesser interest in running for offices. Why do you think this is the case?

Councilmember Elizabeth Brown: My understanding is that studies have also found that women are less likely to be asked to run for office. So, while women are just as likely to win and do just as well on the job, the infrastructure within the political system speaks of men first and prioritizes their impulse to run. This is a driving factor for the dearth of women stepping up to political office. I think women feel they need to check all the boxes of their qualifications more than men do before they become officially qualified to do something such as run for office. Running for office is inherently self-promotional. You have to talk about why you are great and why you're the best for the job. I think women are less prone to that sort of self-promotion especially – if they feel like they haven't checked all the boxes. You see that playing out in the presidential campaign right now. Hillary Clinton is the most qualified person to run for President, certainly in my lifetime. Yet she is running against a man who is not just under-prepared but flagrantly dismissive of the need to prepare – and her preparation is being mocked and degraded as “calculating” rather than remarkable competence. Women notice this. No wonder we are less likely to stick our hands up and say, “I want to run.”