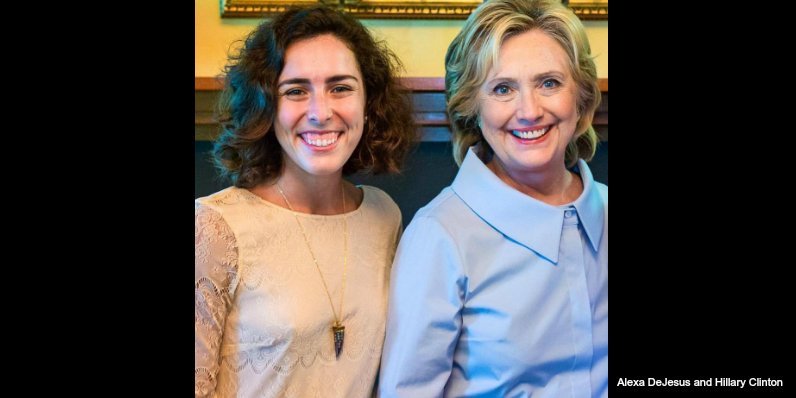 Women For Action: I can see that you've held a wide variety of women's advocacy positions - as jobs - and through volunteering. Can you tell me more about what drew you towards feminist advocacy?

Alexa DeJesus: My parents were very involved in local and state politics so while I was growing up and I would always tag along to help hold signs on the bridge or lick envelopes for a big mailing. I was six years old when Congressman McGovern was running for re-election and my family had put a lot of work into the campaign. We went to see President Bill Clinton speak for the Congressman at Kennedy Park in Fall River, Massachusetts. I remember wondering what makes a person such as President Clinton so influential and commanding, and as he spoke, he left a profound effect on me. I wanted to represent the needs and rights of fellow citizens by speaking of and creating liberty and justice, as he was. I knew then that this wasn’t an ordinary job, but one that I later realized takes an incredible amount of determination, leadership, and kindness.

As I became more involved in the study of U.S. history it was apparent that few women were celebrated as significant contributors to the Ameri-can political landscape. I was driven to find women leaders, which led me to Hillary Clinton. I will never forget reading the words of Hillary Clinton, “When somebody says America can’t elect a woman President, I say come out on the campaign trail with me, see the parents who lift their little girls onto their shoulders and whisper into their ears, “See! You can be President too.” I knew there were women’s voices and stories left unheard, not written in our history books and I was going to help change that. Today, I am a proud graduate of Smith College and Programs Coordinator for the National Women’s Political Caucus.
Women For Action: One of those positions included interning for Hillary For America. She's now clinched the nomination and leading Trump in polls. What are your thoughts on the possibility of President Clinton being a reality?

Alexa DeJesus: I have long admired Secretary Clinton's dedication to public service. She has spent her entire career breaking barriers, powering through bias criti-cism, and focusing on her goals. As Secretary of State, she set records, traveling to 112 countries, and mak-ing gender equity a priority of U.S. foreign policy. Humanity needs a U.S. President who has foreign policy experience to help lead our country, and the world to stability. There is no one more qualified than Hillary Clinton, who has the proven ability to work with difference, not in spite of difference, to achieve this mission. A Hillary Clinton presidency means a new generation will grow up with an altered view of what women can do, a broader view. No longer limited by archaic standards, we will finally have the privilege to flip to a page of an American History book and see ‘Hillary’ among ‘Johns’ and ‘James’ in the Presidential list. We will all see that “after all, when there are no ceilings, the sky’s the limit,” (Hillary Clinton, DNC 2016).

Women For Action: This election year is also a significant one for the future of the Supreme Court. I know I've asked you your thoughts on Hillary specifically. But in the bigger scope, what key women's issues do you think are at risk with SCOTUS if the election goes the other way to Trump?

Alexa DeJesus: The next president will likely appoint Supreme Court Justices, transforming the landscape of our court and law. Gender bias continues to create huge barriers for women today. Women are still making less than men per dollar: 78 cents for white women, 64 cents for black women, 54 cents for Latinas. Many women do not have access to reproductive healthcare, birth control, safe abortions, and general free-dom to make decisions regarding their own bodies, whether health, dress, or action. Women are still not equal under the U.S. Constitution, a truth that has revitalized the effort to pass the Equal Rights Amendment, thanks to the ERA Coalition and it’s partnered organizations. These are just a few examples of the disparities, to which both law and society need to work together to fix. Specifically speaking about SCOTUS, it is essential that the court is diverse and fair, something that is in great threat with a Trump presidency, between his vitriolic rhetoric and bogus proposals, it would completely turn around our march toward equality. The Supreme Court has, and will need to continue to take on women’s issues regarding equal pay, sexual harassment, reproductive health, and a whole slew of issues that will affect women, families, and the future of all Americans.

Women For Action: One of the National Women's Political Caucus' goals is to increase women's participation in American politics. How do you think this election cycle has done in terms of Congressional candidates & also with women exercising their right to vote? Do you see improvements in participation from recent years with Hillary as the Democratic nominee?

Alexa DeJesus: With 18 women running in the Senate and 187 in the House, this is an exciting year for women Congressional candidates. Women makeup 60% of the electorate and thus have the power to win elections: in 2012 55% of women voted for President Obama, compared to only 45% of men. Women also usually vote alongside women's issues, like abortion, by voting for pro-choice candidates. If women get out to vote this election cycle, there could be a lot of seats both in the House and Senate that will be won by feminists.

Here at the NWPC, we recruit, train, and elect pro-choice progressive women candidates and even amongst progress we have found difficulty convincing even the most intelligent and driven women to run for office. They see how women are treated, especially while campaigning, and it is hard to blame them for not wanting to put themselves through that. In 2016, this scrutiny towards women candidates has been changing.

Hillary Clinton has bore the brunt of sexist attacks throughout her lifetime and recently there has been a drive to change how the media depicts women in politics and in other arenas like sports, business, and entertainment. Throughout this election cycle, the NWPC has endorsed 55 candidates in federal races, and countless candidates in local and state races through our 13 state and local chapters around the U.S. and the number will continue to grow as November approaches. I urge everyone to vote in all levels of government. Winning local and state elections are just as crucial as winning the federal ones. In the words of President Obama, “Don’t boo, vote!”

Women For Action: What challenges and obstacles have you faced centering your career around women's advocacy?

Alexa DeJesus: I have the utmost appreciation and respect for the women that have preceded me in women’s advocacy because even though we face our own battles today, it was an enduring journey to get here. Thankfully, I have had the support of my family and friends in my ambitions for women’s rights and global equality. After graduating from Smith College, I immediately began working at the Women’s Bar Association & Foundation of Massachusetts and then came to the National Women’s Political Caucus. Although anti-women voices are heard in the me-dia and online I have always surrounded myself with strong, empowered feminists, which has allowed me to opt out of heart-aching debates on women’s rights. During this election cycle, I have taken a more direct role engaging with people who are not of the same mind, posing an obstacle. It is al-ways important to hear the other sides and keep an open dialogue on women’s issues, but it has been difficult speaking with people, especially other women, who believe feminism is obsolete because women are already equal and the fight should be laid to rest. As my fellow feminists know, the journey is far from over. Fourth wave feminism has unified with intersectionality building a greater force than ever. The energy at the United State of Women and Democratic National Convention this year was undeniably fueled by people from all states, ethnicities, abilities, religions, sizes, and sexu-alities coming together to celebrate women’s achievements and work toward the future. At the end of the day, you must work hard for what you believe, no matter what others are saying. What really matters is good work based on equality and compassion because together we can shatter each of our individual glass ceilings. We can help each other take on leadership roles and change our culture to respect and empower all women to be the best person they can be. One of the greatest messages from the Convention is, in fact, the greatest truth of our world: that we are stronger together. We must work toward changing public opinion and cultural norms to believe and honor that truth. It is the only way.