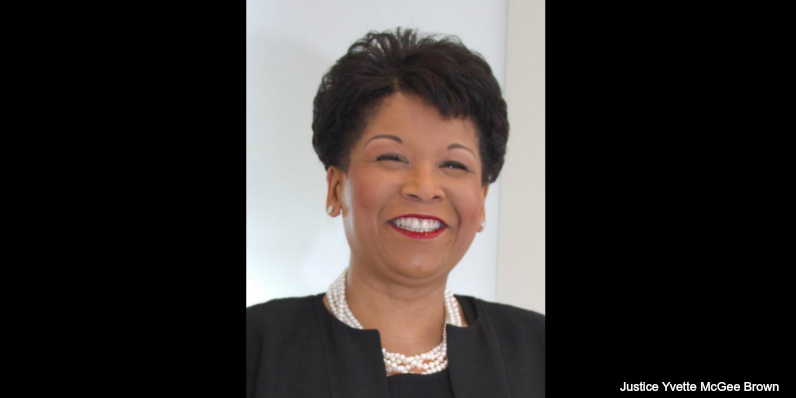 Lean In Ohio: You are the first African-American woman to serve as a justice on the state of Ohio's highest court. How did it feel to reach such a landmark achievement?


Justice Yvette McGee Brown: I still remember the day I was sworn in- it was one of the coldest days of January and actually the same day that Gabby Giffords was shot because a couple congress members literally ran out of my ceremony. However, witnessing the Martin Luther King Auditorium overflowing with people was humbling--Some had arrived from Cleveland, many had taken charter buses down.


Growing up, I never imagined being on the Supreme Court or having such a great career but in that moment when I raised my hand, I could not help but think of my grandmother and those whose shoulders I stand on; their sacrifices allowed me to stand in that place. It's a shame that it took until 2011. When I was appointed to the court it had been 37 years since a person of color had been on the court. I find that objectionable  in a state that is as rich and diverse as Ohio. We should not have a supreme court that lacks any diversity. I hope that it does not take another 37 years before we have a person of color on the court again.


Justice Yvette McGee Brown: That's exactly right. Early on, I could not have imagined this career. You have to be open to opportunities and you have to look for inspiration in mentors, sometimes in non-traditional places. If you look at my career, I have done just about everything you could do with a law degree. I have always been willing to raise my hand for the extra work or for the difficult assignments. I think when you have confidence in your ability to move forward even when there are setbacks and disappointments, it allows you to be fearless. If you are going to be a woman who goes to the top, you have to be fearless.


Lean In Ohio: Additionally, you are no longer serving on Ohio’s  Supreme Court and joined the Columbus office of Jones Day as a partner practicing business and tort litigation. What led to the decision to make these particular career changes?


Justice Yvette McGee Brown: What changed were the voters. Ohio elects Supreme Court justices. The year that I ran which was 2012, there were six of us on the ballot. Only two of us were highly recommended by the State Bar Association and every major newspaper in the state. We’re the two that lost.. I loved being on the court even though I was the only democrat. I had great relationships with my colleagues. I enjoyed being part of the third branch of government and debating the law, working through how the law should apply, it was a great experience. I will never forget it...