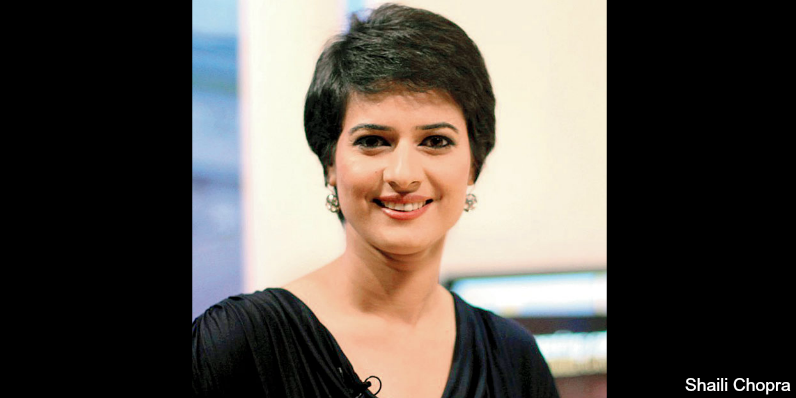 Lean In Women of Color: You were named one of India's 50 most influential women in media, marketing and advertising by Impact Magazine. You are also an award-winning journalist, former primetime anchor of NDTV Profit and ETNOW. You have interviewed subjects such as Warren Buffett, George Soros, and Christine Lagarde. In your opinion, what sort of personality traits is necessary to thrive in this media?
Shaili Chopra: The ability to take risks. I believe media like tech is an ever evolving space, looking change and transform what and how we consume news and information. For me the onset of digital was a game changer. In 2012, when I quit mainstream television, I realized an earthquake of sorts was going to break, and rebuild the media story. In 2002, when I joined television, I felt the same for the screen. I think one has to be able to sense the change, stay humble, take leap of belief and experiment if one wants to thrive in this media. It’s easy to stay glum and glued to your position of strength. Challenging it, is what takes you to the next level.
Lean In Women of Color: Broadcasting and media is a competitive field. Who or what has been instrumental in your professional development?

Shaili Chopra: My media career was driven by one single minded principle. Focus on ideas and people you learn from. Some of the milestones of my journalistic career also shaped where I went – I was the first woman to report from the Taj terror attacks in Mumbai in 2008, an assignment that fell accidentally in my lap because I was the only female reporter (along with a male colleague) in the region before the curfew went off  in the city. I reported on some of the biggest cross border deals India did and therefore saw the economic cycle transform. I also wrote India’s first book on Politics and Social Media called The Big Connect on how politicians worked social media for themselves.
Lean In Women of Color: What sort of tools should be made available to get more women involved in decision-making roles in broadcasting?
Shaili Chopra: I think media has been more progressive in terms of giving women opportunities but these can expand at the top level. We need women in decision making posts so they can not only become inspiration for others but also identify more women to lead.
Lean In Women of Color: The Lean In Women of Color campaign is features success stories about women of color in leadership while bringing to the forefront some of the unique challenges one might face due to unconscious biases.  Can you tell us about an obstacle you’ve had to overcome and how your strategized moving forward?
Shaili Chopra: I have not faced any discrimination on basis of my color, but indeed gender biases are so steeped in patriarchal societies that they remain an overhang. We have situations where men are handicapped to understand that women are ambitious, go-getters and seek their rise. Media may have a lot of women but it’s an industry where biases are prevalent and men can be very opportunistic and patronizing in their behavior with women. I have had some horrible bosses but I have been able to call out their bluff. I have seen some men in media who are obsessed with designations and not being doers. These are part of a larger shake up and we need to have much more dialogue to sort out such weeds from the system.

Lean In Women of Color: You founded SheThePeople.TV. What led to your decision to leave a successful career to launching your own enterprise?
Shaili Chopra: To showcase to the world that India doesn’t have ten but half a billion women achievers. That women who are in the same rich lists are not emblematic of India’s female strength. That we have real stories, successes and struggles. Today it is India’s biggest powerhouse of inspirational stories of women achievers.
Lean In Women of Color: You are also a golfing expert and founded golfingindian.com. How is this innovation contributing to women?
Shaili Chopra: Thanks for asking this. Golf like the world over is a male dominated sport. India is no different but improving given that it’s picking up here. Not only was I among the few to break the glass ceiling by becoming a golf entrepreneur – and getting special honour by India’s biggest golf club – but I think my platform is instrumental in putting the spotlight on golf in a big way for women. With our young female golfers now playing LPGA, Ladies European Tour and The Olympic Games – there is a tremendous effort to change the past precedence.
Lean In Women of Color: What sort of advice would you offer your younger self at the start of your career?
Shaili Chopra: Take a chance on yourself and always surround yourself with people who you can learn from.

Contributed by Lean In Women of Color | Interviewed by Julene Allen