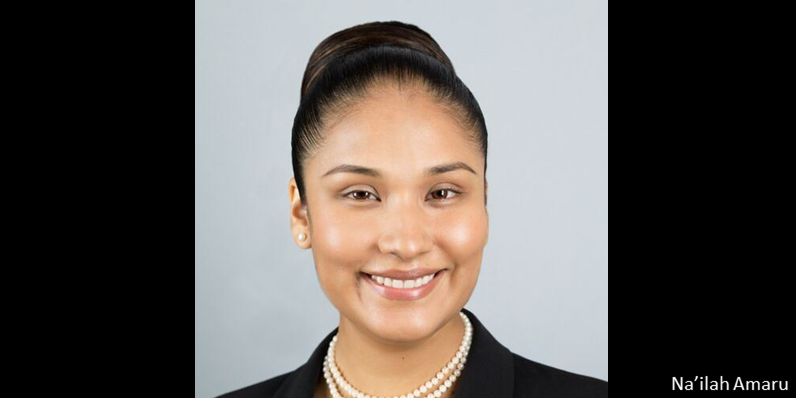 Back in 2016, Na’ilah Amaru was chosen for what would appear to be one of the most important responsibilities in a presidential election. She was selected to formally nominate Hillary Clinton for president of the United States on behalf of the Democratic party.

Before delivering her nomination speech at the 2016 Democratic National Convention and declaring her support for Clinton to a national stage, the New York delegate had been working as a policy strategist in Atlanta, Georgia after serving in the United States military. Amaru received distinguished honors for her service. She was the lowest ranking soldier and only woman to receive her battalion’s Soldier of the Month recognition and was awarded an Army Commendation medal for exemplary service.

The following is a sample of our interview with Na'ilah Amaru which is featured in Women For Action magazine's March - June 2018 Issue.

Women For Action: You have served as a policy advisor to Atlanta Mayor Kasim Reed, legislative aide to U.S. Congressman John Lewis, and as executive director of the Black, Latino, and Asian Caucus of the New York City Council. Which area do you feel you’ve made the most impact and why?

Amaru: I have learned from each of my positions and I am grateful for the opportunity to serve different communities in Atlanta and New York. The concept of “impact” is relative because it can be viewed through the lens of both scale and scope – both of which are critical in the political and policy landscape.  When I worked with Kasim Reed, I focused on issues from a citywide perspective. When I worked for Congressman John Lewis, I focused on issues specific to Georgia’s 5th congressional district. When I worked for the Black, Latino, and Asian Caucus, I focused on issues relevant to all twenty-six districts of the caucus members. In each of these positions, I was able to make an impact, but it looked different in terms of scale and scope.

Women For Action: You were a speaker at the last Democratic National Convention. You had the opportunity to tell your personal story on a national or even global stage. What was this experience like?

Amaru: The experience was the honor of a lifetime. I received a phone call notifying me that I was selected to serve as one of three presidential nominators. While I was still processing the moment, the DNC staff and I dived directly into logistics - lodging, transportation, and my own personal speaker tracker—all the different elements that make the DNC come to life. I was on autopilot through the entire process—I felt the magnitude of the moment after I delivered my speech. I was interviewed off to the side of the stage and was asked, "What were you thinking during your speech?" I responded, "In my speech, I  referenced my eleven-year self, but my eleven-year-old self never dreamed THIS." In that moment, I turned around, gestured behind me with a sweeping motion, and lost my breath. It was the first time I saw the crowd, and that was the moment I was moved to tears. When I delivered my speech, I wasn't focused on the crowd—I was focused on my mission and that was to tell my story. Seeing the crowd from the side of the stage deeply moved me. Diverse, beautiful, and rowdy, it was a reflection of who we are—everyone in America was somewhere in that crowd. The Democratic Party works to create policies and programs that provide solutions and make America a better place for everyone. To be a part of history by submitting Hillary Clinton's name into presidential nomination was surreal and the honor of a lifetime. Another important aspect of my DNC experience was the emotional process of sharing my story which I had always kept private. I was touched by how many people approached me afterward or sent me personal messages through social media, sharing how they connected with some part of my journey. Whether it was the lived experience of having two moms, being a veteran, being a woman of color, or being an immigrant, many chapters of my story are uniquely American and shared with countless others. It was a lesson for me in the power of vulnerability—how we can share who we are and connect with each other through our stories. Where else in the world can a child begin life in an orphanage and have the opportunity to share her life's journey on a national stage?  Only in America.

Women For Action: After losing the election for what many thought would be the first woman president of the United States, what is a key takeaway from this experience?

Amaru: Around 7 PM on Election Night, I was interviewed at the Javits Center and was asked what I would do if Hillary Clinton lost. I remember telling the reporter, "a lesson I learned from her 2008 campaign loss—as heartbreaking as that was—you pick up the pieces and you get back to work." Back in 2008, I was devastated when she made the decision to suspend her presidential campaign. Her loss was so deeply personal. I hoped she would run again in 2016, and when she went through that process and became the nominee, people thought "Finally, a woman president might really happen! After 240 years, democracy is about to include women! We the people is about to include us."  When Hillary lost, I was angry, scared, and heartbroken, but you pick up the pieces and you get back to work – and that process looks different for everybody. After the 2016 election, I knew people who couldn't get out of bed for days. I knew people (including myself), who had organizing meetings the same week because our lives were on the line and we had no time to waste. The key takeaway of 2016 was grounded in the same truth as 2008:  In life, we will hit low points, but we do what we have to do to keep moving forward. A key step in the process of moving forward is taking the time to pick up the pieces. Then, you rebuild. There is a tremendous amount of personal agency and power in this process, and I have learned, that what we rebuild is often stronger than what was broken.